Clear beer is often a goal for many homebrewers, the standard being set by the commercial brewers. With modern brewing techniques and common industrial practice we have come to expect our beer to be crystal clear. When homebrewing, clear beer is not common. In reality, most homebrews are cloudy.

The two main culprits of cloudy beer are yeast and proteins.

As the yeast near the end of their job (i.e. when fermentation is ending due to lack of sugars) the single cells of yeast will clump together in groups of thousands and settle out. This is known as flocculation[1]. Different yeasts flocculate differently. Some yeasts settle out nicely and others do not. One strategy to get more yeast to settle out is to cool the beer (such as lagering) before bottling or kegging.

The other culprit of cloudy beer are proteins along with polyphenols and lipids (fats). While proteins are not necessarily small molecules, they are small enough to remain in suspension.

Beer can be clairified using Irish moss, a fining agent. Fining agents all work by making the smaller molecules aggregate into larger particles so they settle out of solution. This can be mathematically described by Stokes Law:

The k-carrageenan is a polymer of β-D-galactose-4-sulphate-3,6-anhydro-a-D-galactose. It is similar to starch or cellulose (i.e. comprised of thousands of carbohydrates). The negatively charged sulfate groups are thought to interact with the proteins in suspension. As the wort cools, more and more proteins interact with the k-carrageenan and the k-carrageenan adopts a more compact structure. The result is the molecular equivalent of marbles in syrup. After the churning of an active fermentation ends (4-5 days) the carrageenan-protein chunks settle out with the yeast. 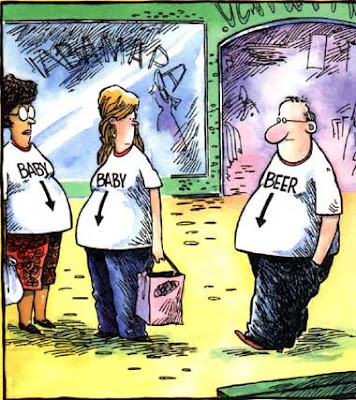 Thank you. I opened up the bottle and it smelled vile. Now I'll use it anyway. Yay science.

Is there any other reason to make beer clear other than aesthetics? It would seem to me that since polyphenols and plant lipids are good for your health you'd want to just leave it as is...

Yup, aesthetics is a big reason. There might be some flavor issues, but it is hard to determine if the haze causes flavor differences.

Now that I keg my beer, the last third of the keg is usually completely clear. I use the clarity to gauge how much is left. If the beer is very clear, I start to get sad.

There are some flavor issues for me, but I don't know how much of it is psychosomatic. I do think I can detect the difference in texture or "mouthfeel" (a word that will never sound real to me).

HI a brief description is so cool i really recommend you the irish moss so nice good idea.

Hi irish moss great person he is really a good person no doubt im agreed he is the best.

A brief description of irish moss is that he is gifted great person nice talent.

There are some specialist beers from Belgium and perhaps Germany which are designed to be cloudy. Indeed you have to shake the bottle to ensure that the sediment is fully dispersed within the liquid before pouring.

I understand that hangovers are somewhat dependent on the complex hydrocarbons in the liquor, as well as the alcohol, so a cloudy drink might not be good news from that perspective.

@ ChillTheory, that's true. But, making your beer clear will help others to bring themselves to drink it. Plus, I look at it like this: if the polyphenols and plant lipids are stuck together, there's an inconsistency in the batch. Each taste will be different, kind of like what I thought of Cheerios as a kid. So, breaking that apart helps bring the batch to a greater consistency. I'm no scientist though. I could be way wrong.

I always filter my hot wort through a bed of leaf hops & hot break. It sounds like I may be missing out on the effects of irish moss by filtering out the chunks before primary fermentation.

Is there any alternative to "Irish Moss"? I'm in the middle of brewing and don't have any moss, so is there something else we can do to get the clarity in the beer.

I'll be glad to share my own thoughts to you soon. Thank you for sharing such valuable articles.

I love making my own beer and trying other people's brews. Clear/cloudy makes no difference to me and to a lot of other people. I don't know where the need to have clear beer comes from. Let's be honest if you can't drink a beer because it's cloudy, you're being just a little bit precious. No offence intended, but perhaps if it's cosmetics were focussed on, we should be drinking soda water. And that's what some of the beer that comes from our major commercial breweries tastes like. Good article.

Irish moss or gelatin are both excellent fining agents that don't seem to affect the taste of the finished beer at all. I suppose most of us are used to cloudy beer, and we're not put off by it, but it can be a bit of a shock to folks who are not familiar with homebrewed beers, so it's nice to clarify the beer if you share it with others.

I prefer Irish moss because I have vegetarian family members who won't consume gelatin. And, when you think about it, cow hoofs in your beer?

The wine industry actually uses egg protein as a fining agent. Cloudy wine I imagine would be an issue. I completed my first lager which is very clear but I would like to try irish moss soon. Great article.

Irish moss is added towards the end of the wort boil. Isinglass is added a couple days before racking to secondary fermentation. It is not vegan as it is made from fish swim bladders. Beware of too much fining as the quest for beer clarity which is achieved by the removal of unwanted chemical compounds may also remove wanted compounds that provide flavor. You don't want clear macrobrew swill do you?