I realized tonight as I was updating my brewing status that I need to name my beers. Not the ones I clone, but the ones I have developed on my own. Of course, I am still in the R&D phase with most, but my cream stout is beyond development. I love it. The dark, roasted flavor that coats the back of your throat, and the hint of sweetness from the unfermented lactose that plays so nicely with the roasted barley leaving a bit of caramel sensation. mmmmmmmmmmmmmmmm yum!!!

The problem is, it doesn't have a name.

The other beers in my recipe box are a pale ale that compares to Mirror Pond Pale Ale (it has lots of cascade hoppy goodness to it), And a brown ale that is in the vein of Newcastle. Neither of these beers has a name. I plan on perfecting the recipe before thinking of a name.

So, back to the cream stout.

Regardless, my cream stout still doesn't have a name. I found out today in MN, by law you must name your child within 60 days. I'm not sure what the penalty is if you don't. My cream stout has been without a name for almost 6 years now.
Posted by Chemgeek at Wednesday, February 28, 2007 3 comments:

Wow, it's been a week since I last posted. There is nothing like a new baby in the house to totally disrupt one's life. I am not complaining. Having a new little girl is fantastic. But, the fact remains, I'm getting a lot less done. Especially blogging. Obviously. I've been meaning to follow up on some beer SPME things I've done, but things like that are on the back burner. In fact, I added several back burners to my proverbial stove to accommodate the increase in back burner eligible materials.

Tonight I have a moment to sit and write a little. But, what to write about.. so many things. I could write about how the Y chromosome level has dropped to 10% in my house. Or I could write about some research I've been doing related to carbohydrates in swine manure. There's always the General Chemistry test I just wrote. Or the fact that U2 NEVER made a bad album (I'm listening to Achtung Baby right now). Or maybe some stuff on eicosanoids that I have been learning more about lately.

Instead, I'm going to talk about beer, my beer.

This homebrewing stuff rocks. I started homebrewing in 1996 when I lived in Lincoln, Nebraska. I got all of my goods from Kirk at Kirk's Do-it-yourself homebrew. I took a bit of time off while finishing my Ph.D. (am I the only one who always writes Ph.D. as pH.D.? It drives me crazy) and started again in 2006.

Since starting again, I have probably brewed about 18 batches. But, this time around I have really gotten into the science of it. The science is fascinating. One of my goals with this blog is to convey what I learn about it. To do so will require me to know my subject matter very well ("the best way to learn something is to teach it").

For now, I just have a few pictures to share.

I love stouts and I made an oatmeal stout. My goal was to make something similar to Samuel Smith's Oatmeal stout. According to legend, oatmeal stouts and/or cream stouts were developed as a drink for lactating women in the 1800's. Of course, in the 1800's the top treatments for any ailment were bleeding, induced diarrhea, induced vomiting or mercury. Here is a picture of my oatmeal stout: 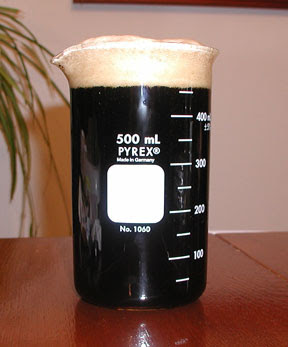 I also made a bitter. I am really starting to like bitters. They tend to be lower in alcohol but higher in flavor. Here is my bitter: 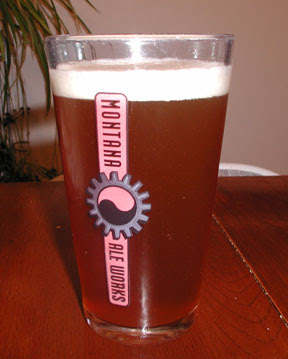 This beer is featured in a glass from Montana Ale Works found in Bozeman, MT. Their beer is great, the food is superb and the scotch selection is excellent. It has been years since I was there.

Finally, what does wort look like? Here's a look at my brew kettle. 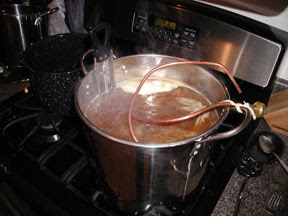 This was during the last 10 minutes of a 60 minute boil. I had just added my wort chiller (the copper tubing) to sanitize it. At this point, it was only 2 weeks away from "mmmmmmmmmmmmm beeeeeeeeeer."

One thing I have learned from reading blogs is that, no one wants to read a 3000 word post. Unless you can write well (or is it good?) like Matt. I can't, so I am going to stop now before I expose my weakness.
Posted by Chemgeek at Tuesday, February 27, 2007 5 comments:

I haven't been brewing much lately. Mostly because my beer cellar is full. I have 10 cases of bottles and they are all mostly full. If I collected all of my empties, I would have almost a case. So, I would estimate my current beer stock at 9 cases. I am going to brew a cream stout and a pale ale next. It will probably happen next week, depending on when my supply shipment gets here. My current stock does not include a pale ale or enough stout.

I prefer American Pale Ales (nicely hopped with Cascade hops) over anything. I now regret branching out in the recipe realm. I should do a pale ale every third batch. I've done about 7 batches since my last pale ale. The beer I've done has all been good, but I miss pale ale.
Posted by Chemgeek at Sunday, February 18, 2007 4 comments:

Upon who's shoulders do we stand...

One of my favorite Chemistry blogs, Chembark, has a great post on the top-10 Organic Chemists of all time. Now, there is always going to be disagreement with lists like this, but I would have trouble saying any of the top ten shouldn't be on the list. There are other great organic chemists, but these are the best of the best.
Posted by Chemgeek at Thursday, February 15, 2007 1 comment:

I racked my Experimental Ale to a secondary. It tasted pretty good. Maybe a bit too bitter, but I was expecting that. I don't think it will be too bad. I also dry hopped with 0.5 oz of cascade hops to increase the flavor and aroma.

SPME of my beer

Finally, I am getting around to posting about the SPME (solid-phase microextraction) I did of one of my beers. SPME is pretty sweet. It involves dipping a fiber coated with what is usually on the inside of a GC column. Clever Canadian. The fiber is then placed in the GC/MS inlet port at about 300°C for 3 minutes. Any analytes are desorbed and sent to the MS detector via the 30m GC column (I can't remember what type of column I used).

In this case I used a fiber coated with 75μm of a carboxen/polydimethylsiloxane. The beer I chose was my second attempt at cloning Fat Tire Belgian Ale. A 4 mL sample was acidified to pH=2 and the fiber was placed in the sample while stirring for 15 minutes. The GC/MS trace is shown below: 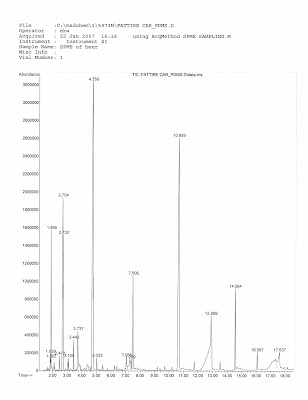 I'd love to tell you what all of the peaks are, but you are going to have to wait until tomorrow. I have the list, but I'm tired and am going to bed.....
Posted by Chemgeek at Thursday, February 15, 2007 2 comments:

Sure, we all love a "40" of "O.E." every now and then. But, that bad boy is missing something that makes beer unique. Hops. Most malt liquor is unhopped or only slightly hopped.

Hops are a critical ingredient in beer. These flowers from the female plant botanically classified as Humulus lupulus provide beer with the resins and essential oils that give beer its bitterness, aroma and to some extent flavor. There are a ton of resins and terpenes found in hops. Each variety of the 50+ types of hops, offers a different chemical profile. The possibilities are endless.

Hops have typically 3 uses in making beer. 1) Bittering 2) Flavor 3) Aroma. How a hop is used, depends on how long it is boiled during the brewing process.

Below is my propose mechanism for the isomerization of alpha acids to iso-alpha acids.

Recently, Nova aired a program on Percy Julian. Julian was a black organic chemist who overcame everything blacks had to overcome in the early 1900's and went on to enjoy an extremely successful career as a chemist. He did remarkable work on steriods.

The Nova program was well done. I would have enjoyed a little more actual chemistry, but obviously the show was meant for a broader audience.

Stories like this always make me wonder, how many brilliant minds have we missed, lost or wasted because of bigotry, hatred and just plain stupidity. As brilliant as Julian was, he was certainly limited in what he accomplished. Not by his ability, but by the world he lived in. He did all of his steroid work at a paint company for crying out loud. Give this guy an endowed chair at a leading university and the world could be different today.

If you get the chance, watch a rerun or get the DVD. It's worth it.
Posted by Chemgeek at Wednesday, February 07, 2007 3 comments:

It's time to clean out the cupboard. Here is what I am going to mix together.

Chinook or Perle hops for bittering
Cascade for flavor, aroma and dry hopping

I posted this recipe on the Northern Brewer forum. From the feedback, it looks like I am making an American Brown Ale. That sounds good to me. I'm going to brew this tomorrow.
Posted by Chemgeek at Wednesday, February 07, 2007 2 comments:

There are so many reasons not to become a meth addict, but here's one more.

It's a new way to get meth. Some people drink the meth-tainted urine outright to get high. Others filter the drug back out through the cooking process.

Thanks to the folks from WCCO-TV in Minneapolis for giving me another reason to not use meth.
Posted by Chemgeek at Saturday, February 03, 2007 7 comments: 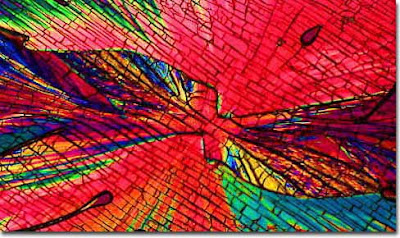 As pointed out by Retrospectacle, late nights in the lab + a light polarizing microscope + beer = real perrty pictures.
Posted by Chemgeek at Saturday, February 03, 2007 1 comment: