I just recently learned that oak barrels (used in wine and beer making) can be "sanitized" by burning sulfur in them to produce gaseous sulfur dioxide. This doesn't actually sanitize the barrel, but it inhibits the growth of mold and bacteria.

This is especially useful if the barrel is being stored for any length of time. Keeping an atmosphere of SO2 inside the barrel keeps the peskys away. 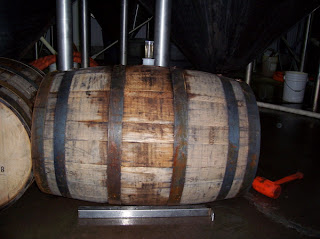 Before wine or beer is added to the barrel, it is critical that the SO2 gas be fully removed or H2S can form. That would smell and probably taste awful.

I'm planning on experimenting with oak chips in some future batches of beer. Conditioning in oak barrels would be awesome, but not practical (at this point).

The picture is from the Ithaca Beer Brewers Blog.
Posted by Chemgeek at Wednesday, December 26, 2007 2 comments:

My spiced ale is in the bottle. It is not carbonated enough yet, but I do know the nutmeg is way tooooooo strong. We'll see how it is in a few weeks. A bit late, but hopefully good.

Posted by Chemgeek at Tuesday, December 25, 2007 No comments:

During the mashing of the grains, the amylase found in the barley is used to break down unfermentable starch into fermentable glucose. The goal is to break down as much of the starch as possible.

Starch comes in two different forms, amylose and amylopectin. They are both polymers of glucose. Amylose is a linear polymer, and amylopectin is a branched polymer. There is usually more amylopectin in a given sample starch, but it is the amylose that can be used to identify the mashing progress.

A common and simple test for the presence of starch is the iodine test. A solution of iodine (I2) and iodide (I-1 from something like potassium iodide, KI) is added to the sample. The iodine/iodide solution is reddish, but in the presence of amylose it turns dark blue (almost black).

First of all, iodine (I2) is not terribly soluble in water. The addition of iodide (I-1) makes it soluble by forming an I3-1 complex ion.

Amylose adopts a coiled or helix shape. When I3-1 is added it gets trapped in the coils of amylose. The iodine atoms trapped in the coils can be in the form of I3-1 or I5-1 or more iodine atoms (I'm not sure and I don't know if anyone is). The resulting interaction between the amylose and the iodide complex results in a shift of the light being absorbed by the iodide complex. This happens because there is transfer of charge to the starch molecule. This affects the energy spacing of the electrons in the iodine.

The result is a complex that does not absorb light in the blue region of the visible spectrum.
Posted by Chemgeek at Thursday, December 20, 2007 4 comments:

Final exams are in full swing. My blog silence may continue for a bit. I plan on actually getting back to some chemistry of brewing when things slow down. Until then, you can enjoy one of my baby pictures. 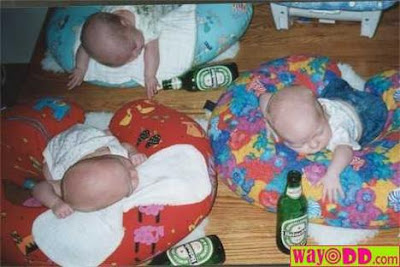 Courtesy of wayodd.com
Posted by Chemgeek at Monday, December 17, 2007 3 comments:

Labels: General, outside the normal realm

During this time of year, things get busy. The semester is ending in the typically frantic manner, and I have little time to do things not related to school. I'm not complaining. That's just the nature of my job.

It seems that during this time of year, I'm reminded of things I really hate. Here are a few examples:

I hate fantasy football. My team had a great week but got creamed in the first round of playoffs nonetheless.
I hate football pick 'em leagues. I really suck.
I hate grading papers. I assign papers because it very important that our students be able to write and practice makes perfect. But, I hate reading these. I don't know how the folks in the English department handle it. It drives me nuts.
I hate needing one simple item from Wal-mart (or any store) and having to deal with the horrid hoards of people. I'm a big Amazon.com (and the like) fan.


On a happy note, I plan on brewing tonight. During the partial mash and boil periods, I will read and grade papers. Sounds like fun....

Since updating to OS 10.5, I have not used the Chemdraw 9.1 program on my computer. Shortly after updating to Leopard, I downloaded a demo version of Chemdraw 11.0 just for the fun of it, and used that for 2 weeks. I didn't really intend on purchasing it since version 9 does everything I needed.

Well, the two week trial ended and I reverted back to Chemdraw 9.1. Everything was great until I tried to save my file. Apparently, while using OS 10.5, Chemdraw 9.1 can't save. I got the spinning wheel and then Chemdraw would quit. I tried everything. Uninstall, install, repeat.

Since I am a Mac guy and since Cambridge Software is slowly becoming more and more Mac-unfriendly, I purchased the Chemdraw Pro version of 11.0 since the Ultra version contains lots and lots of cool features that work only on a Windows machine.

For how I use it, I have not noticed any big changes or improvements. The interface looks nicer, but the functionality is essentially the same (at least for how I use it).

The one thing I really wish they would include is a shortcut button for the "distribute" function. I use this all of the time. When I have a number of structures, I like them distributed evenly. The "center" and align functions all have shortcut buttons, but not the distribute. Unless there is some way to set this up, I will always be annoyed by this shortfall.

Yesterday I got an email from the folks at Wiley Scientific. They wanted me to know that the current issue of Journal of Pharmaceutical Sciences was available free of charge. The complimentary online access is in honor of Professor William Higuchi. I first thought to myself, "who the hell is William Higuchi." After further thought I realized, if a publication such as this is going to make such a fuss over someone, that someone is probably very important in that field. Perhaps I am a bit naive when it comes to the big players in the world of pharmaceutics. Well, to be honest, I should drop the "perhaps" in that last sentence.

I found myself in the same situation I find my students in. Most of my students (at least early on) have never heard of E.J. Corey, Woodward, Sharpless, Trost, Grubbs, etc... I had never heard of Higuchi but upon reading the article in the JPS and on his website, I realized he is quite the deal in pharmaceutics.

I'm much more familiar with organic chemists. A few years ago, as a way of putting the players in this field in perspective for my students, I started using sports analogies. This worked for 80% of my students. The other 20% were annoyed that once again I had boiled something down to sports [1].

I'll stick with the NBA since most of the players are fairly recognizable.
E.J. Corey is the Larry Bird of Chemistry
Grubbs is the Kobe Bryant of Chemistry
Sharpless is the Magic Johnson of Chemistry
Hoffmann is the Scottie Pippen of Chemistry
Nicolaou is the Karl Malone of Chemistry
etc......

These are fairly big names and they correspond to big names in the NBA. Frankly, the names get swapped around all of the time, but the point is made that if Chemistry was a spectator sport, we would know all of these names.

So, who are your superstar chemists and what sports figure are they analogous to? Who is the Michael Jordan of Chemistry? Better yet, who is the Luke Walton, Stephan Marbury, Vlade Divacs etc... of Chemistry?


[1] For me, most of my analogies involve sports or kindergarteners, but the kindergartener thing is another post.
Posted by Chemgeek at Tuesday, December 04, 2007 2 comments:

The family and I went out and cut down our Christmas tree recently. We went to a tree farm and spent a while picking out just the right tree. We eventually picked one out and killed it (i.e. cut it down). It was a bit big, but we didn't think too much of it until we got it home.

Once we got it to the front door, the massive size became evident. Until I had some perspective, I didn't realize how big it was. The fact that it seemed to weigh about 200 pounds should have been a clue. With a bit of shoving and pushing we got it inside and stood it up. Thankfully, we have a vaulted ceiling. So, there was room, barely. The thing is over 10 feet tall.

I've always wanted a really big tree, but this is ridiculous. I tried taking a picture, but it doesn't do it justice. I'll let you use your imagination.
Posted by Chemgeek at Saturday, December 01, 2007 10 comments: