A beer journey: from start to finish: Part 3

The beer journey (part 1 and part 2) has ended. 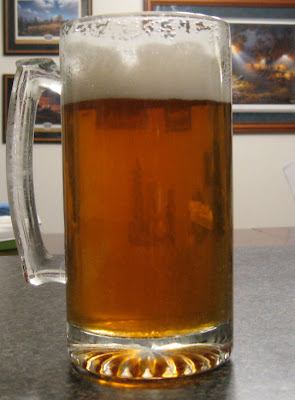 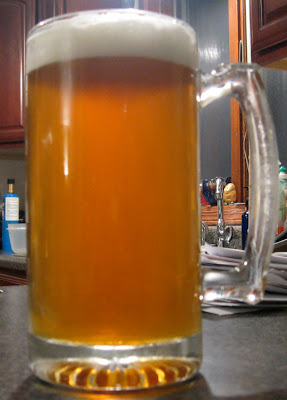 I am now anti "go green"

I think of a lot of things. Recently, when the trees were finally forming leaves[1], I was thinking about chlorophyll. The area is finally turning green and the amount of chlorophyll being produced by trees is no doubt in the "ton" range.[2]

I got to thinking about the visible spectrum of chlorophyll a and b. Here is a picture from Wikipedia: 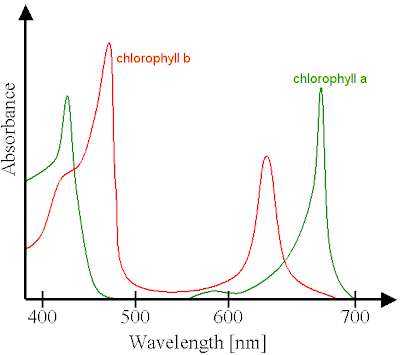 Do you notice anything? Look at the spectrum again and think about it for a second.

Let me ask you this: Why do leaves (most of them) look green?

Yup, because they don't absorb the green wavelengths of light. They don't absorb anything in the 500-550 nm range. In other words, green plants reject the color green!!!!

If you care about plants (and I hope you do because your survival depends on them) you should have the courtesy to reject what plants reject: GREEN.

I'm in favor of plants so I will not "Go Green" for anything. I will "Go Red and Blue". That's what plants like, and I like plants. 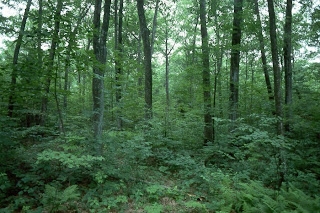 [1] We're still waiting for solid Spring weather.
[2] That would be an interesting calculation to figure out what mass of chlorophyll (all types) are stored in one tree.
Posted by Chemgeek at Monday, May 19, 2008 6 comments:

Labels: gripe, outside the normal realm

Done with finals.
Grades turned in.
Desk cleaned off(sort of).
Time to decompress.

Preview:
The fruits of my Beer Journey.
A review of my Kölsch.
Some interesting stuff I recently read about beer and chemistry.
Posted by Chemgeek at Thursday, May 15, 2008 1 comment:

This blog will be under a finals week induced silence for a few more days. I need to write three finals and then administer and grade them.

However, for the first time in my teaching career, I have finished all of my other grading (lab reports, homework, projects etc...) before finals week. That, my friends, is an accomplishment. Although, the adverse effect of such an effort is that my office is a complete disaster. My desk has enough clean space on it for just my computer. I have piles of papers, books and sundry items all over my desk and office.

It will eventually get cleaned up, but not until after finals week.

Until then, expect very little to nothing from this blog. In others words, everything is normal....
Posted by Chemgeek at Saturday, May 10, 2008 No comments:

We've all been there

I have a student who has been working on a "research" project for me. The project is to extract a protein called concanavalin A from Jack beans. I use quotes because this isn't a novel area of research by a long shot. My goals for this project were to #1 develop a method of extraction that I could use in my Principles of Biochemistry course and #2 teach my student a variety of laboratory methods.

Concanavalin A (con A) is a lectin from the Jack Bean. A lectin is a protein that binds carbohydrates. In the case of con A, it binds with glucose and mannose but not galactose (or other carbohydrates). It does not have enzymatic activity, and its role in the plant is not clear (as is the case for most lectins).

My student has been working on this project all semester. Briefly, the Jack beans are soaked in pH 4-5 buffer and then blended in a blender. The supernate is removed after centrifugation. It is saturated with ammonium sulfate. The precipitate is collected and dialyzed against 1M NaCl. The protein solution is passed through a sephadex column and the Con A binds with the sephadex. It is displaced by glucose. The solvent used in the sephadex column is 1M NaCl (that's important to remember for this story).

Through trial and error and up the steep learning curve that is undergraduate research, my student eventually got enough sample to the sephadex column part. She loaded the sample onto the column . However, instead of running 1 M NaCl through the column, she used 1 M HCl instead. ugh! There is a big difference between a pH of 7 and a pH of 0. It wasn't good for the protein which, for the most part, appeared to cease to exist intact.

I should point out that she is NOT a bad student or a lab disaster waiting to happen. She is a very good student and one who absolutely knows the difference between NaCl and HCl. But these things happen. Unfortunately for her, that meant the end of her project. 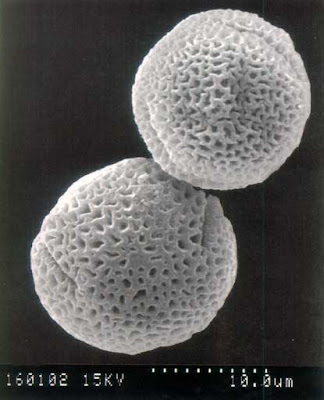 I hate tree pollen. I have very few allergies, but tree pollen gets me every year. Right now, the tree pollen levels are pretty high. Yesterday, they were very high. I really can't complain. A few days of a runny nose and sore throat are pretty mild compared to some people (including those I am related to).

I'm brewing my Metathesis Pale Ale right now. I have 5 minutes of boil left. It is a very simple beer, but my favorite