Safety glasses are not optional!!!! PART 2

Even when I am at home, I use safety glasses when I'm doing things like using power tools (saws, trimmers, drills etc..) or mixing a really strong drink (OK, maybe not that one, but you get the point).

I am slowly (sloooooooowly) building a bar in my basement. Tonight, I finally found some time to make some progress. I went to my shed to cut some lumber to the requisite size. I was wearing safety glasses as usual. During the course of events, I measured and marked a piece of plywood without glasses on as tape measures and pencils are not commonly known to cause eye injuries.

I didn't put the safety glasses back on.

As I started to saw through the wood, I hit a knot and a small chunk of celluose, hemicellulose and lignin (i.e. wood) flew through the air and nailed me in the eye. It specifically hit my sclera (the white of my eye). It didn't hurt much, but I knew something had happened.

I had my photographer-wife take a picture so I could put it on my blog and gross some of you out: 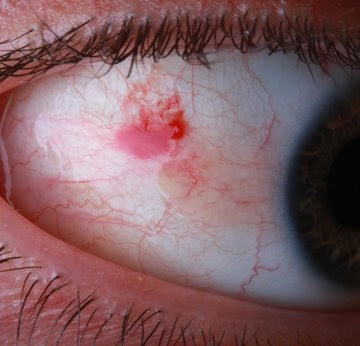 From my perspective, it looks a lot worse. At this point, I'm not going to seek medical attention since 'tis mearly a flesh wound.

I am the dumbass for not wearing them like I preach. A chance to brew

Now that my grades are in, my children are on the mend, and I've shoveled my driveway, I finally got a chance to brew tonight. I brewed a cream stout.

Not only did I brew a much needed batch, I got to break in my new brew kettle. I recently purchased a 22 quart (5.5 gallon) stock pot. This thing is awesome. I am now able to do full boils (i.e. boil the entire 5 gallon batch). There are a lot of benefits to doing full boils. One of which is hop utilization. The extraction and isomerization is more efficient in a full boil.

Here is a picture of my new baby. I put a pint glass next to it for reference: 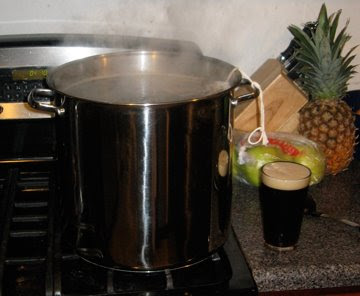 Since it is butt-ass cold around here and there are mounds of snow everywhere, I decided to let Mother Nature chill my wort for me. So, I stuck the pot in a drift on my deck: 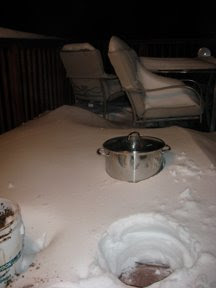 The snow was cold and the air was a zero degrees Fahrenheit. I moved the pot around as it melted the snow. Here is the aftermath: 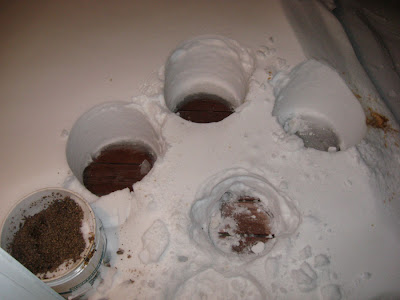 My spent grains are in a bucket to the left waiting very patiently to be composted.

This version of my cream stout was a partial mash version. I changed the recipe a bit. I'll let you know how it turned out.
Posted by Chemgeek at Monday, December 22, 2008 8 comments:

I finished grading, and I just submitted my grades through the world wide web to my institution's computerized grade collector. It's good to be done.
******
As a special treat, I am watching basketball on the telly. I'm watching Minnesota compete against the Louisville Cardinals. I'm glad I can use the word 'compete' as it has been a long time since a Gopher team has been able to compete with a top ten team. I fully expect the current Minnesota lead to evaporate. Louisville is too good, but Minnesota actually has a chance to win.
****
The Blizzard of '08 is winding up nicely. We've had about 6 inches of snow and it is blowing around nicely. In Minnesota snow always falls at a 45° or more angle. Today that angle is about 85° from perpendicular.
Posted by Chemgeek at Saturday, December 20, 2008 5 comments:

I'm still not done with my grading for the semester, but that has been the least of my concerns.

My son had surgery this past week. Everything went well and he is in good shape. The worst was trying to explain to a 2 month old why we we couldn't feed him for nearly 10 hours. That really sucked. We were waiting for an OR to open and the cases currently in the OR were all going long. This was unfortunate, but it put things into perspective. Our son's condition required surgery, but it wasn't a liver transplant or anything. We could wait, even if it meant a lot of crying.

So, that ordeal is done. He is doing very well. We are hopeful this is the end of it.

What do I do now with all of my free time?

Sorry for the silence around here. Along with the crazy finals crunch and insane amount of grading (or 'marking' for my non-USA readers), my son needs surgery after all. That's one hell of a way to end the semester.

As a result, the silence around here is probably going to continue. For many of you, I'll be visiting your blogs and commenting. I just don't have the energy to write a real post right now.

Hopefully, in a week or two, things will get back to normal. At which time, I will rededicate myself to writing about all of the things I know related to Homebrew and Chemistry.

Until then, I wish you all a very Merry Christmas
Posted by Chemgeek at Tuesday, December 16, 2008 2 comments:

For reasons I won't go into right now, when I left grad school I was not completely done with my dissertation. I left campus thinking I was nearly 95% done. The reality was that I was only about 65% done. One of the biggest challenges was properly formatting my dissertation.

There are very stringent guidelines that must be followed when it comes to formatting a dissertation or thesis. I knew this from my experience writing a M.S. thesis, and I was prepared. I submitted early versions through the mail to the Grad School office for inspection. I got several suggestions and made those changes. In other words, my formatting was all set and essentially approved. No need to worry about that.

In preparation to print the thing out, I had purchase 3 reams of the appropriate type of paper. I ended up printing it out on the very last night I possibly could. In the morning I had to send it overnight. If I didn't get it out I would miss the deadline and I would not graduate.

It was while I was printing it out when I noticed it: two of my reams of paper were noticeably pink!!! Not a bright pink, but compared to the white pages, they were pink. I freaked out for a little while.

I needed to print 4 copies. They would be inspected for compliance to the formatting rules. I assumed pinkish paper was NOT going to be acceptable. But, what choice did I have. There was nothing I could do at that point. I printed them and tried to not mix the white and pink paper in the same copy.

In the morning, I overnighted them and decided to accept my fate as there was nothing else I could do.

I waited for a few days until I heard they had been accepted. They were in compliance. I have no idea if they noticed, but I don't care.
Posted by Chemgeek at Monday, December 08, 2008 3 comments:

Can I get a break from life for a minute????

Just when things were settling down from the previous craziness, my 3 year old broke her arm tonight. Poor kid, but man is she tough.

Long story short:
She was running in the house. Dad (that's me) yells, "slow down before someone gets hurt." She trips and smacks her hand on a book shelf. Stupid books. What are they good for anyways. She cries inconsolably which is very uncharacteristic for her as she is tougher than me. Something is wrong. ER. X-rays. Yup, broken radius. Stupid bookshelf. Cast. Sling. We go home. She eats a bunch of pizza sans the use of her dominate hand. It doesn't slow her down and self-pity is unknown to her. What a kid.

Stupid books and their shelves.
Posted by Chemgeek at Monday, December 08, 2008 6 comments:

I've been away from blogging for a while. I have a reason. Read the following tidbits for more.

My Thanksgiving sucked. 75% of my children got sick with something. In one case, my 5-week old needed a urgent surgical (non-emergency) procedure. The local pediatric surgeon was enjoying the holiday and couldn't be bothered. So, our pediatrician sent us to Rochester. The Mayo clinic is located in Rochester, MN. The Mayo clinic is one of the top medical facilities in the world. Kings stop by on a regular basis to have their colons examined.

If you live in the Midwest (USA) and a doctor sends you to Rochester, it is because you either had your arms removed by a farm implement or you have a disease that has not yet been named. In other words, you don't get sent to Rochester unless you have a dire medical situation. To hear a doctor say my infant son had to "go to Rochester" scared the shit out of me. In my mind, that translated into "this is a critical situation and your son is in a dire medical situation. Failure to act now will endanger his life." Well, it wasn't that serious. The threat was not imminent, but it was serious enough that we couldn't wait until Monday.

Long story short... after a visit with no fewer than 4 doctors on Friday and an unplanned follow up today, I am delighted to say his only major problem is that he is still related to me. He should recover fully.

My Thanksgiving sucked (sorry to be redundant). My three year old started vomiting in the morning on turkey day and continued to do so every 45-60 minutes for about 24 hours. I felt so bad for her, but I was sooooo proud of her for hitting the bucket every single time. I stayed up helping her all night. This was the night before the preceding story took place. I was very tired.

When we took our son to Rochester, we were expecting that he would need surgery. Therefore, we could not feed him. He eats every 2 hours and this was torture for him and us, but mostly for him. While he was screaming in the ER, I discovered one of the greatest medical inventions of all time: sugar water. The nurse brought us something called "sweet-ease." Cute huh? It was just 24% sucrose in water. She dipped the pacifier in the sweet nectar, plugged it in his mouth and he sucked like he had never sucked before. He fell asleep even though he was 4 hours late for food. The sugar water induces a strong sucking reflex which induces, as far as I can tell, a state of euphoria (just for you mjenks).

To add to all of this, my youngest daughter has a chest cold. She sounds like she has been a 2-pack a day smoker for 10 years. I feel so bad for her, but she does sound kind of cool when she talks. Her spirits are high (so are mine thanks to Mr. Daniels, he he he he), and she is getting better.

I realize none of this has to do with Chemistry or Homebrew, but for me, writing it has been theraputic. I promise, once things slow down, I will post something interesting. I actually do have a post almost ready about how Irish Moss works. I just need the time to pull it together. I also racked a spiced ale tonight. It tasted pretty good.
Posted by Chemgeek at Wednesday, December 03, 2008 8 comments: