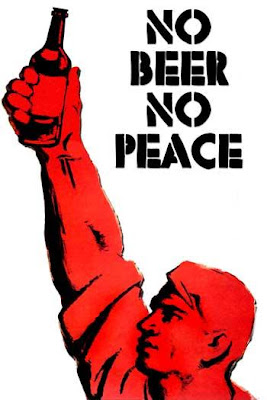 Since the beginning of August (± several days), I have had three beers on tap. I have a pale ale, a dark lager and a saison. All fine beers.
About a month ago, I found out my brother was going to be in town during this coming weekend. Since he is an enjoyer of beer, I figured I would save some for him. Easier said than done.
I've spent the last several weeks doing my best to ration my beer. This has been challenging... no actually it's been torture. I enjoy drinking my beer, but I've abstained. I've limited myself to one (or two) beers every few days. I think I should have enough.
Thankfully, my local neighborhood liquor store is closing to make room for a CVS pharmacy. They've been selling everything dirt cheap. I've taken advantage to the tune of 2 cases of wine for $3 a bottle. Not bad.
Long story short, I should have enough beer to share with my brother, but it wasn't easy. I'll be sure to remind him of that.
Posted by Chemgeek at Thursday, September 16, 2010

Not able to drink as much beer as you want?

Welcome to my world, Cocheese.

The sacrifices we make for family. Of course making sure that they know how much we sacrificed for them is very important as well.
Enjoy

Jenks: oh yeah, that hop allergy. Don't worry, I probably drink enough beer for the two of us.

Lisa: Oh, they will know my pains. They will know. That's what family is for, right? Guilt trips.

Be strong, my friend! Your reward will be laying a ginormous guilt trip on your brother.

Thanks for waiting Bro! Killing the pale ale keg was my pleasure!

I'm surprised it was the only one to go. The dark lager is not too far behind.